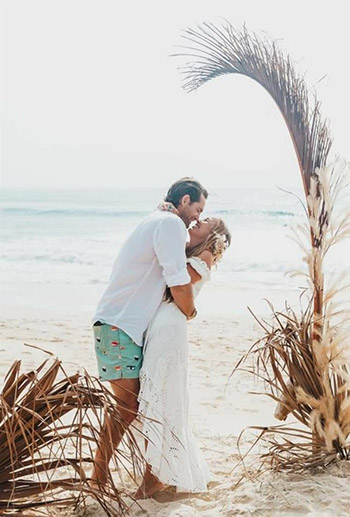 An Australian father, stuck in Thailand, is unable to enter SA to meet his newborn son.

Read the full article on News24

Covid-19 disaster regulations have been cited as the reason why the father has not been able to enter the country.The couple’s lawyer alleged the SA government’s refusal to grant a visa in breach of the Constitution.

A Cape Town mother has made a desperate plea for her Australian husband to be permitted into South Africa to meet their newborn son.

The case has been taken to the High Court.

Almost six weeks after his child entered the world, Luc Osstyn has yet to meet his son for the first time – and be reunited with his wife, Jade van Ryneveld.

The painful separation saga is now being fought by the couple in the Western Cape High Court – to challenge the Department of Home Affair’s refusal to let Osstyn enter.

Osstyn is Australian, and Jade is South African.

While work kept them travelling regularly, it was their intention before lockdown to move to South Africa to raise their child.

Speaking from her parent’s home in Milnerton, Jade told News24: “It’s been an emotional rollercoaster. The birth of our son, Harley, was the best day of my life so far. But just saying that…my heart sinks, as that day will forever be tainted, because Luc could not be there.”

The child was born on 14 July – now almost seven weeks ago.

She continued: “It definitely wasn’t the birth I had planned. I had an emergency C-Section at 36 weeks, as I developed placenta previa, pre-eclampsia and Hellp Syndrome! So I needed Luc’s support a lot more than expected.

“The thing that gets to me is that this is time we’ll never get back. Luc has missed the birth of his first child and the first two months of his life. That’s something we have to live with forever. We’ll never get this time back. That’s what gets to me the most.”

Osstyn said in summary: “There seems to be a systemic failure and severe breakdown in communication between the Justice Department, DHA and Dirco on this matter. I have already missed the birth, which cannot be helped now, but my boy is six weeks old and I have not held him; he needs his Dad and my wife needs her husband.

Luc said there is talk of a class action lawsuit as tens of other families may be stuck in similar situations.

Van Ryneveld said it was painful that Luc has missed many firsts, like “his first smile, his first bath, and now the first time standing supporting his own weight”.

“All I wanted was for him to be there, and talk at 02:00 in the morning. Trying to figure out what we’re doing, like any new mom – not really knowing what you’re doing. I just needed him there.”

Asked her views on the South African government’s positions, she said: “This is where I get really angry. No parents should be forced to miss the birth of their child. I think it’s unconstitutional to keep spouses and families separate, and can’t believe our government has denied my husband the right to be here for the birth of our child.

“Luc and I are married. I am South African. We have chosen to live in South Africa and have our first child here. Just because Luc is not South African doesn’t mean we are any less of a family, or less deserving to be together.”

She added: “The one saving grace is that I have my parents to support me. They’ve been an amazing help. But it’s not how we wanted it to be.”

The couple’s lawyer, Craig Smith, believed the government and DHA were failing South African spouses and children of foreign persons.

“Luc has tried in vain to reunite with his wife and child, and has been separated despite the immigration laws that exist to accommodate controlled entry into South Africa.

“He has literally pursued the department’s senior management every day for the last three months and is still stuck abroad, having missed his son’s birth, and remains separated from Harley, who has never held,” Smith told News24.

“Luc had to even approach ourselves, as immigration lawyers, to enforce the fundamental rights of dignity and family preservation in our Constitution to compel home affairs to recognise what ‘human rights protection’ is supposed to be.”