• Australian Luc Osstyn missed the birth of his first-born in Cape Town.
• And wife Jade van Ryneveld has missed having her husband at her side for seven weeks.
• But finally their separation nightmare may be over.

For 37 days a Chinese woman was detained at the Cape Town International Airport, but with the intervention from Craig Smith, the Western Cape High Court has ordered Home Affairs to allow her back into the country.

Read the article on: Times Live or iol, you can also listen to the interview with Craig Smith on Talk Radio 702.

The following is the transcribed text of the radio talk with Craig Smith and Steven Grootes.

Her Lawyer, an Immigration Attorney is Craig Smith on the line from the Cape Town CBD.

Craig good afternoon to you, thank you for your time today.

Meizhu Chen arrived at the airport, she was in the cue at immigration. Why was she, suddenly pulled over and then held for so long? 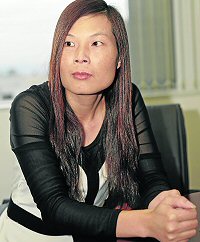 Craig Smith:
Steven this is a very good question.

There’s a lot of talk these days about profiling.

What happens is, the immigration officers (and this relates to the immigration act) tries to secure a balance between upholding national sovereignty and looking at it quite restrictively to insure that national security is observed, versus the balance and interests and rights of those needed foreign people to come in, and those foreign investors to be in South Africa. So, our immigration laws and the policy tries to bring a balance.

What we have at the moment is a hardening of view (which I think is attitudinal) which is being cascaded down from the top echelons of the immigration department, well home affairs department, to a situation where you would arguably arbitrarily be able to pick people out of a cue on arrivals at an international airport and you can sort of willy-nilly (for the want of a better word), or arbitrarily decide to take out a person out of the cue. And then subject them to an interview and arguably ignore many of their rights and then send them home; at the expense of the airlines.

Steven Grootes:
37 days in a small room for most people that looks an awful lot like prison. I mean, surely something like this must somehow be illegal. I can’t imagine our constitutional court being too happy if it came before them.

Craig Smith:
Yes, that’s a good point, Steven. I mean, I actually went there myself. The lady was initially detained on the Sunday which I think was the fifth of October. I attended on the Monday.

Home Affairs would contend that this is not… this is a transit lounge, and give you every feeling of walking around a facility with all the amenities at your disposal; but it’s anything but that. In fact it’s an unventilated very small room with a prison cell locked with a security official outside.

And Home Affairs, I went to court on this matter, and to the high court on a number of applications, and Home Affairs maintained this is not a detention. They use the proverbial back door scenario where they say “Well look, you know, the foreign person who has a valid visa to enter South Africa could always at her own discretion leave the country. So therefore it’s not a detention, so therefore we will detain her as long as we wish.

So, we got caught up in the semantics where they would attempt to argue this is not a detention this is simply holding her for the airlines convenience.

And this is an ongoing practice. This is not just one isolated incident.

Steven Grootes:
Chen obviously, and her family, had some resources. They were able to ask you to help out. I’m not quite sure of the agreement obviously, but if she hadn’t been able to make contact with her family, if she didn’t have these resources, is it possible she would still be there?

Craig Smith:
Oh, she would be in China as we speak. So, she would affective… she has a work visa. The work visa was applied for at the department like any other visa. The visa is valid, can be rejected or approved. It was approved and therefore she has her visa to enter South Africa and work at a particular place.

Obviously Home Affairs want to almost have a second bite at the cherry and attempt to say “Well maybe you were granted this visa, but we’re not so certain.”

So, ordinarily what they would have done, had I not intervened, she would have been detained on the Sunday and the very next flight would have, either on that particular day or the next day, she would have been stuck on a flight at the expense of the International Airlines – who I might add are not particularly happy with these scenarios – and she would be sitting in China whilst her husband’s in South Africa.

Steven Grootes:
Craig Smith, thank you very much indeed. Immigration lawyer on the line from the Cape Town CBD.

More sources for this story